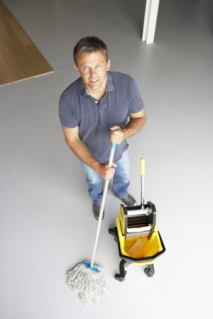 Bicarbonate of soda, sodium bicarbonate, baking soda or just bicarb – it's all the same white powder. It helps cakes rise, and you'll probably got a stash of it in a cupboard somewhere. Our mothers certainly did. Yet who would know that this simple cooking ingredient has a whole multitude of uses for cleaning the home. It's a little miracle worker, really.

Even the ancient Egyptians knew about the cleaning powers of this common alkali crystal or powder and used it as soap. By the 1800s, people were using it for baking and also to put on freshly caught fish, to stop them from going off and starting to smell. So as a cleaner, a leavening agent and a deodorizer, it has been known for centuries.

Here are four ways we can use bicarbonate of soda today around the home. In contrast to commercially bought, chemically prepared and strong multi-purpose cleaners, bleaches and disinfectants, baking soda doesn't negatively affect the watercourse, the environment or fish life. It can be used in homes connected to reed bed filtration or septic tank systems, where it's really important that all the natural bacteria and small creatures which break down waste are NOT destroyed.

1.    Cleaning ovens and drains. Usually, these mucky jobs mean using powerful and potentially lethal chemicals, often based on bleach or ammonia. But, to clean the cooker, all you need is to sprinkle bicarb on the bottom of the oven, mixing with just enough water so the soda gets damp. Leave it overnight. No nasty chemical smells, no risk to your skin and lungs. You just scooped out the grime in the morning, and rinse off any residue. For drains, pour half a cup down the pipe, followed by the same quantity of vinegar. The two will react and fizz. Leave it to work for about 15 minutes, then pour half a kettle of boiling water down the drain.

2.    Getting rid of smells. For dog and cat little accidents of the liquid kind, sprinkle the powder on and let it dry before simply sweeping it away. To get nasty smells out of your clothes, soak them for two hours at least, in warm water with a cup of bicarbonate of soda. Overnight is fine too. Then, just wash them as normal.

If its your fridge that's a bit stinky, put an open box of baking soda in the back – as simple as that! It draws in the smells. You can also remove cooking and garlic smells from your chopping boards, by sprinkling them with the powder, scrubbing in and then rinsing. Lemon juice also works well.

3.    Cleaning up the silver. Now, some experts will say that sodium bicarbonate is too strong for delicate jewellery, but others don't have qualms. If you're not sure, test a small area. All you need is a paste of soda with water, that's gently applied with a soft, clean and lint-free cloth. Work it in gently. It will remove tarnish from silver cutlery, platters and photo frame no problem. Interesting fact: toothpaste works too!

4.    Put away the abrasive scrubs. On things like enamel, ceramics and glass halogen hobs for example, scratching can occur all too easily when you use metal soap-filled pads or wire brushes. Some scouring creams are just too harsh as well. So – you can make a less harmful scrub from liquid soap and baking soda combined. Make it quite thick, like icing on a cake. Then work it in with a sponge in circular, gentle motions. It gets an awful lot of stains, dirt, mildew, mould and watermarks off.

04Jul 2013 Should you Carry out your Own End of...
Professional vs. Domestic Cleaning at the End of a Tenancy When your tenancy is about to come to an end, there is an...
27Jun 2013 The Advantages of Hiring a...
Reasons to Hire Well-established Cleaning Company Many people claim that hiring professional cleaning services is...
24Jun 2013 How to Clean Office Furniture
Best Ways to Keep Your Office Furniture Clean So much goes on in an office on a daily basis. Not only is it a place...